RP-Verb is a sound design powerhouse, though it’s not for the faint-hearted. Pros Awesomely powerful. Has a unique sound. Clearly laid out. 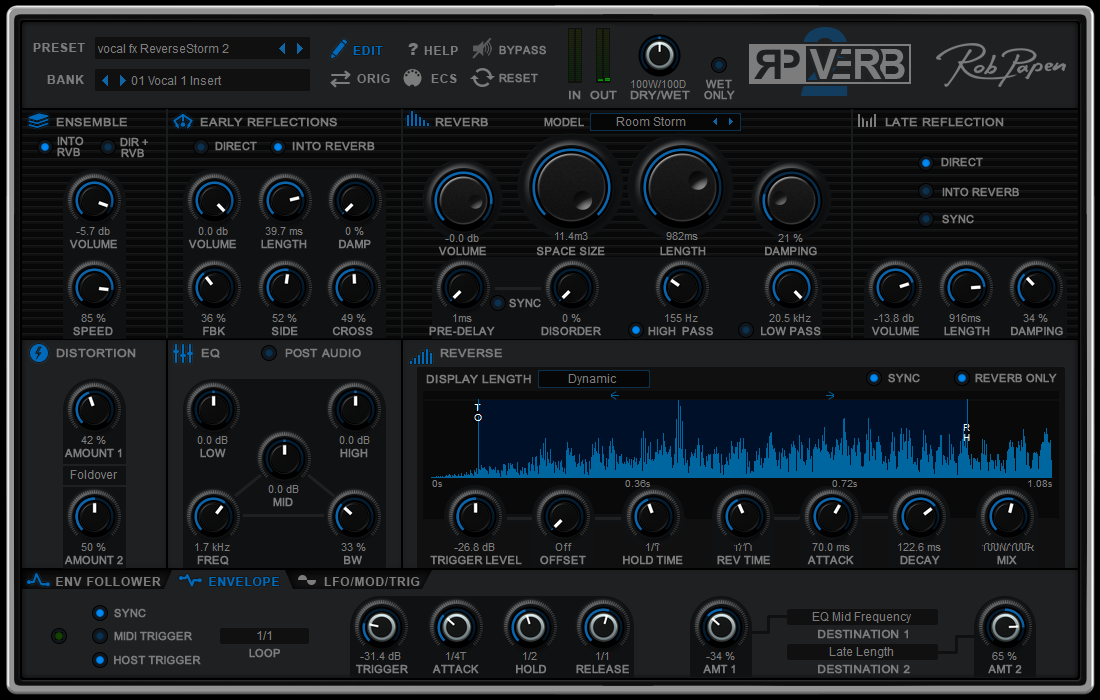 RP-Verb is a sound design powerhouse, though it’s not for the faint-hearted. Pros Awesomely powerful. Has a unique sound. Clearly laid out. Huge selection of presets. Cons Tricky to master. Not ideal for day-to-day use. Renowned sound designer and soft synth developer Rob Papen isn’t scared to stray from the beaten path, as he demonstrated with RG, his ‘rhythm guitar synth’. And neither is his company lacking in the sound processing department, with synths like Predator blessed with a huge range of built-in effects.

For this first strictly-effects effort, though, Papen and his coding cohort Jon Ayres have pulled out all the stops to deliver an ultra-modern reverb. In detail We won’t run through RP-Verb’s features ‘in order’, as the routing is quite versatile, but let’s start by looking at the major sections of the interface. The core is, obviously, the Reverb panel, with Early- and Late-Reflection sections placed either side.

All the controls you would expect are on offer, but with additional surprises, such as Side-Wise and Cross controls for early reflections, which affect the amount of signal ‘bleed’ between the left and right sides, to simulate different room properties.

For the Reverb section’s Pre-Delay and Space controls, you also get Disorder controls, which are designed to affect the build-up of early reflections and manipulate the shape of the virtual space. It’s suggested that these work best with Room reverb types, but they can be great for experimenting with. It’s a little like having a room full of ‘stuff’ as opposed to an empty one and can give a more complex sound.

But the greatest creative potential comes from the inclusion of processing options that are quite unconventional for a reverb, such as input distortion and ensemble sections. There’s a three-band EQ, too. This alone is a hugely powerful way to alter the resulting sound. One drawback, though, is that when changing a parameter, it can be quite disorienting to keep looking back and forth between the knob and the main display – a pop-up over the former would help here. It’s also fair to say that RP-Verb often sounds decidedly ‘digital’, albeit in quite a pleasing manner.

Clearly, this is something that’s quite subjective and, indeed, it may be exactly what you’re after. To add real-time modulation, you can draw in automation in your DAW or record your movements as you tweak the parameters. However, this isn’t the most hands-on way to work and it’s only possible to edit one parameter at a time using on-screen input. This is where MIDI control comes in.

The same menu is also used to unlatch MIDI controls. It also gives you the option to swap and download presets designed for specific bits of hardware. Summary Hidden strength RP-Verb isn’t your everyday utility reverb, then. Rather, its strength lies in its potential for creativity. There are more realistic and easier-to-use reverbs and, arguably, those that offer better value for money, but when it comes to making crazy noises and generating wild sweeps of enveloping sound, there’s something about the way this plug-in’s parameters and controls are set up that makes it an absolute joy to fiddle with, yielding all manner of crazily futuristic or delightfully distorted sounds.

If you’re a serious sound designer who likes doing weird and wonderful things, you’ll be able to get some unique textures and effects out of RP-Verb, and there aren’t many parameters that don’t respond well to real-time modulation.

If you’re not, you’re probably better off opting for one of the many excellent simpler reverberation options on the market. Listen to the RP-Verb in action: Big distorted drums.

Dec 4, Eight years ago, the original RP-Verb marked Rob Papen’s first foray into effect plugins – the company had been all about instruments up to that. Dec 15, We won’t run through RP-Verb’s features ‘in order’, as the routing is quite versatile , but let’s start by looking at the major sections of the interface. Only at Sweetwater! ✅ Instant Delivery and ✅ 0% Financing for your Rob Papen RP-Verb + Delay Plug-in!.

Rob Papen Takes Reverb To Next Dimension With RP-VERB 2

RP-Verb You’ve spent hours on your track? Working and reworking every part to bring your musical vision to life. And you know that the quality of your reverb can be the difference between the rich sounding mix you’re after and one that comes off as flat and artificial. Face it: When it comes to pristine, authentic reverb, it’s the algorithm that counts.